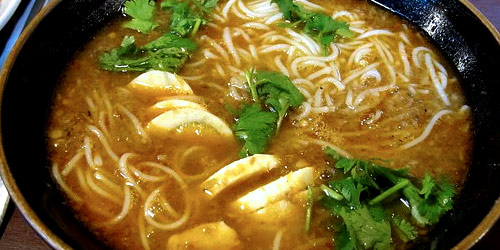 Mix the onions, garlic, ginger, turmeric and chili powder until  a puree.

Heat the sesame oil and peanut oil in large saucepan and cook the puree.
When the mixture begins to brown and tie, add the fish broth, coconut milk and banana heart (or bamboo shoots).

Bring to a boil and cook over low heat until the banana heart (bamboo shoots) are tender. Dissolve the shrimp paste in fish sauce, and add to mixture then add the chickpea flour and dissolved in a little coconut milk.

Stir constantly until the resumption of boiling. Simmer 5 minutes and add the fish.

Then add the coconut cream and lemon juice, stirring until the soup begins to simmer. Taste and adjust seasoning.

Cook the noodles in salted water until crisp. Drain and place in large bowl for serve alongside the soup.

Serve the Moh hin gha in a bowl and give the guests large bowls or soup plates.

It primarily serves the noodles and pour the soup over it. The Moh hin gha should be served hot. It is often accompanied by hard eggs and cilantro that guests will put at will.

Tips : You can use the European or Chinese noodles. 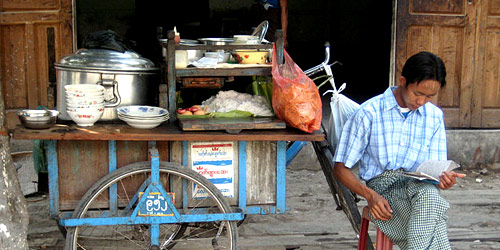 It is often used when the meal has many guests.
There is no real fair or festival without dealers moh bin gha.
The rice vermicelli, a bay of rice flour.