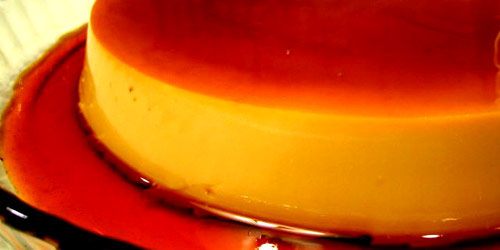 Put sugar and water in small saucepan, heat without stirring until the mixture caramelizes and took a golden brown color. Remove from heat and immediately pour in 6 molds. Stir to coat the molds completely of caramel.

In a bowl, beat eggs and egg yolks until they foam, add sugar gradually while continuing to beat.

In a saucepan heat the milk slowly pour the milk over the eggs while continuing to beat. Add vanilla then filter,and pour in the molds.

Place molds in a baking pan at the bottom of which was poured a little hot water and cook 35 to 45 minutes at 150 ° C.

When the knife inserted in middle the custard comes out clean , remove from oven and let cool.

Once cool, put to minimum overnight in the refrigerator .
Unmold after taking off the edges with a knife and serve.