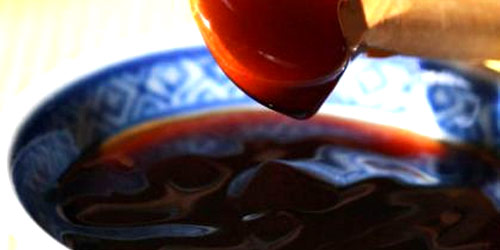 In a saucepan, put the flesh of oyster, water and the clam juice and bring  to boil, simmer over low heat for 30 minutes.

If the mixture clings to the bottom add a little water, simmer for another 5-10 minutes until the liquid is viscous and dark brown.

Strain the sauce through a sieve, to keep the liquid.

The sauce will keep for several weeks in a jar airtight.

Tips : Normally an authentic oyster sauce is prepared by a caramelized oyster broth until it becomes viscous and dark brown. No other additions are necessary, not even sel.Son subtle flavor both sweet and savory flavor many dishes: meats, poultry, fish, seafood, vegetables, noodles and fried rice.

Anecdotes : The oyster sauce is often used in the Cantonese food, Thai and Khmer. In cambodian, it is called Preng Kchyang and in Chinese is haoyou.
The oyster sauce was created accidentally by a Cantonese, Lee Kum Kee. Having forgotten a dish of oysters on the fire, he realized that the broth which was to formed was transformed into a thick brownish sauce rich on flavored . He sold his new production, which quickly became popular. In 1888 he formed the “Lee Kum Kee Oyster Sauce House” to produce its creation in high quantité. At the twenty-first century, for produce the oyster sauce rapidly and for reduce the costs, the sauce is thickened with cornstarch, flavored with oyster extract concentrate (imported from China or Japan) and darkened by caramel.