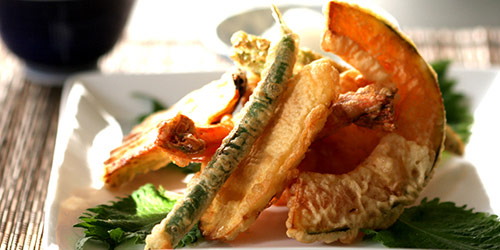 In a bowl put the egg and beat slightly, add ice water, mix well then add to as and flour, stirring gently to avoid lumps.

Cover and let stand 1 hour and reserved in the refrigerator.

Shell shrimp, leaving tails then make a small cut on the back of the shrimp and remove the black vein.

Peel and cut the carrot and zucchini in two in lengthwise and then into four and then a stick of one cm.

Peel and cut sweet potatoes in half and then sliced ​​to one cm.

Cut the pepper in stick and the shiitake hats in two pieces.

Heat oil over high heat. Dip the vegetables and shrimp in batter and then put a small quantities in the oil and cook 3 minutes.

Tips : you can use different ingredients as onions, eggplant or white fish (cod).
The secret of a good tempura is the thinness of the batter must be thinner than pancake batter, and remain cool.
Oil the contrary must be at 180 ° C (you can tell that this temperature was achieved by dropping a drop of batter, which should immediately dip and rise to the surface very quickly with a sizzle and without be black) .
This contrast in temperature that allows rapid cooking and perfect, the crust formed very quickly making the donut crunch the teeth, preventing oil from getting inside too, which keeps the flavor and color vegetables.

Anecdotes : The tempura is usually served as is, in a basket of woven bamboo or a plate placed on absorbent paper. We picked up a piece with his chopsticks and plunged into a ramekin individual, containing added grated horseradish lemon juice (or rice vinegar) and soy sauce.